The Destiny Dice – The Gaming Magi

The Classic Gaming Fantasy Series Returns For Another Roll! 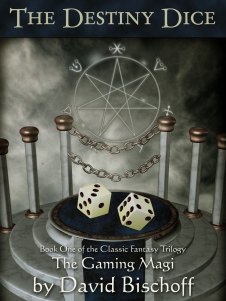 Ian Farthing, apprentice cobbler, was the town fool. Hardly the stuff from which heroes are made!

But Ian, it seemed, had a destiny to fulfill. And Destiny — or was it just a roll of the sorcerer’s dice in the multiverse Doom games? — wanted Ian to enter the Dark Circle, where Dark Lords bought Bright, and demons, dragons, talking cats and magic were the least of the perils a hero must brave on a misguided quest to save a beautiful runaway princess…

“Take one part T.H. White’s THE ONCE AND FUTURE KING, two parts William Goldman’s THE PRINCESS BRIDE, a smidgen of Tolkien and a hefty helping of originality, and what do you have? THE DESTINY DICE…and a lot of fun.   — Joel Rosenberg